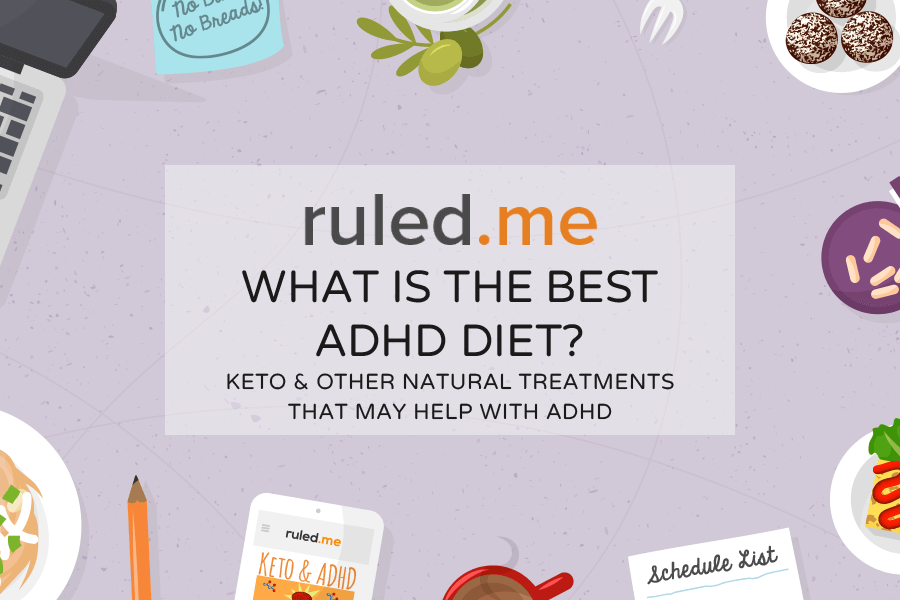 Attention-deficit/hyperactivity disorder (ADHD) is one of the most common neurological disorders affecting children with an estimated prevalence of 6.7% to 12% in the United States. The current research indicates that about half of those diagnosed with the disorder will carry their symptoms into adulthood.

Fortunately, the literature also contains plenty of clues as to how we can potentially alleviate many of the symptoms of ADHD naturally. In this article, we will focus on natural treatments for ADHD, specifically dietary interventions like the ketogenic diet.

Do you find it hard to pay attention? Do you feel the need to move continuously when you should be calm and relaxed? Do you find yourself constantly interrupting others?

These are the most commonly known characteristics of ADHD, but the disorder, as a whole, is much more complicated than simply struggling to stay focused and calm.

In general, ADHD is characterized by a lack of behavioral regulation and by neurological deficits in four areas, including working memory, self-regulation of emotions, internalization of speech, and behavioral analysis and synthesis. 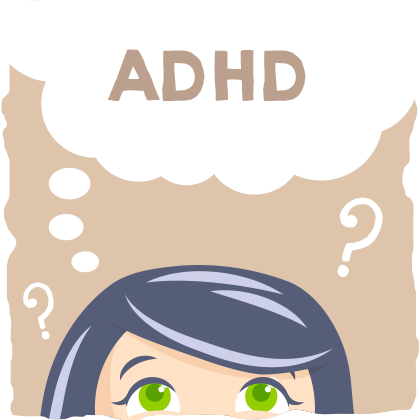 Because of how nuanced the characteristics of ADHD are, the disorder is typically broken down further into three main types: inattentive type, hyperactive/impulsive type, or combined type.

Inattentive type – when six (or five for people over 17 years) of the following symptoms occur frequently:

Hyperactive/impulsive type – when six (or five for people over 17 years) of the following symptoms occur frequently:

There is no lab test to diagnose ADHD. Diagnosis involves gathering information from parents, teachers, and others, filling out checklists and having a medical evaluation (including vision and hearing screening) to rule out other medical problems.

It is also important to note that these symptoms are not the result of the person being defiant, hostile, or unable to understand a task or instructions. The symptoms of ADHD are the outward expression of multiple modifiable and non-modifiable factors that disrupt the proper functioning of the brain.

The Cause of ADHD

ADHD is one of the most researched and written about neurological disorders of childhood and adolescence and so is the treatment of ADHD, but the exact cause is still uncertain.

Current evidence suggests that the cause of ADHD is multifactorial, and both genetic and environmental factors are involved in its development. Let’s take a closer look at the variables that we know play a role in the disorder:

This is not a comprehensive list of all the factors that contribute to the formation and progression of ADHD — and the cause is far from being known. However, the current literature does provide us with clues to the most effective long-term treatment strategy.

Although the first line of treatment is typically stimulants (e.g., Adderall and Ritalin) , the therapeutic approach to ADHD has been shifting. In some cases, environmental changes and behavioral therapy alone are helpful enough.

With that being said, studies have found that a combination of behavioral therapy and medication works best for most people, particularly those with moderate to severe ADHD. However, there are other natural treatment options worth exploring for those who do not respond to medication or who don’t want to rely on ADHD drugs.

Let’s take a look at the most common natural, drug-free ADHD treatments that address multiple potential causes of the condition:

There are different kinds of therapy that have been used for ADHD, but research has found that therapy alone is not effective at reducing ADHD symptoms. This is in part due to the neurological issues that are driven by other variables.

Therapy is best used as a supplement to an ADHD treatment plan, as a way to help the children, teens, and adults with the disorder work through common issues instead of avoiding them.

For example, therapy for children and teens may look like this:

Parents and teachers are taught how to help children and teens with ADHD stay organized and follow directions with tools such as keeping a routine and a schedule, organizing everyday items, using homework and notebook organizers, and giving praise or rewards when rules are followed.

And therapy for adults may look something like this:

A licensed mental health provider or therapist can help an adult with ADHD learn how to organize his or her life with tools such as keeping routines and breaking down large tasks into more manageable, smaller tasks.

Another crucial part of the treatment process is understanding ADHD and how to work with the symptoms. This will require diligent education and training of children and adults with ADHD as well as their parents, families, and teachers.

To do this, mental health professionals will be enlisted to educate the parents of a child with ADHD about the condition and how it affects a family. They can also help the child and his or her parents develop new skills, attitudes, stress management techniques, and ways of relating to each other.

Altogether, behavioral therapy, counseling, and practical support can play a helpful role in managing the disorder, but these approaches won’t address the underlying causes and help alleviate symptoms of ADHD like the remaining three strategies have been found to do.

Chronic deficiencies of certain minerals such as zinc, iron, magnesium and iodine and inadequate dietary intake of omega-3s may have a significant impact on the development and progression of the symptoms of ADHD in children. By addressing these deficiencies, it is possible to improve brain function and potentially reduce some symptoms of ADHD.

The best way to address these deficiencies is with a micronutrient-dense diet consisting of whole foods that the patient can tolerate. Some examples of these vitamin- and mineral-rich foods include seafood, seaweed, organ meats, low-carb vegetables, and egg yolks. However, if these foods are not tolerated by the patient (i.e., they are sensitive or have an allergic reaction to it), then supplements are the next best option.

Although there are many proposed ADHD “remedies” available, the evidence for their effectiveness is virtually nonexistent. At this point, only three supplemental strategies have relatively high-quality research supporting their effectiveness for those affected by ADHD: 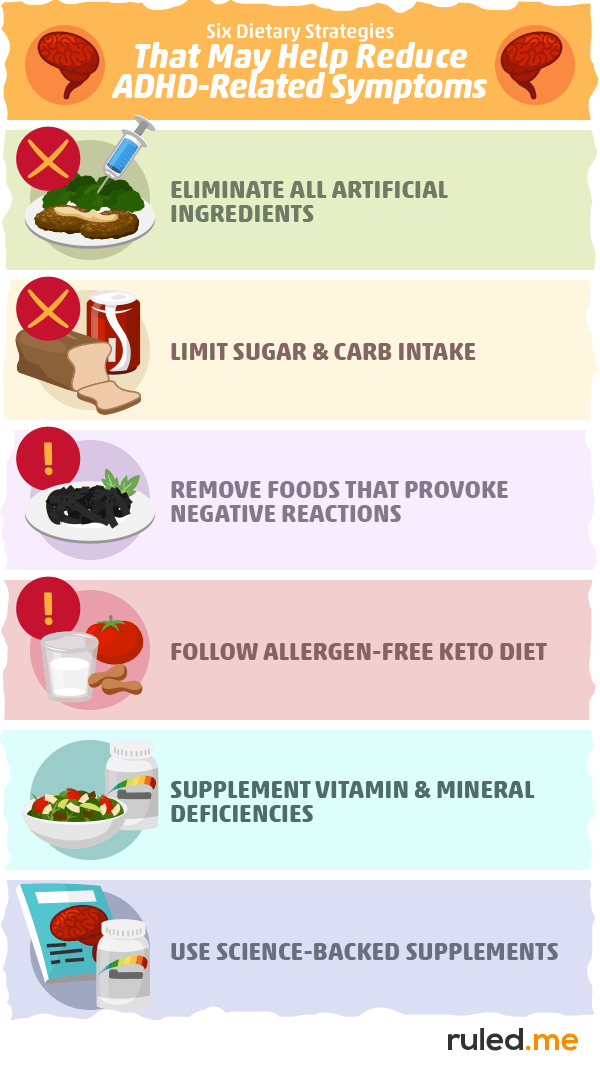 According to the research, dietary interventions seem to help roughly one in every four children with ADHD.  The minority of these individuals — around 10% of children with ADHD — may experience a full remission of symptoms that is equivalent to a successful drug treatment.

Among all of the “ADHD diets” studied, the  “few foods diet” seems to be most effective. Simply put, this diet restricts a person’s calories to only a few less commonly consumed foods (eg, lamb/venison, rice, pear, peas, and others with low allergenic potential).

It also eliminates many of the foods and food ingredients that may trigger ADHD symptoms, such as:

Although this diet is the most restrictive of the diets proposed to help those with ADHD, it is highly effective for many reasons:

By possessing these qualities, the few foods diet addresses many potential causes of ADHD symptoms. However, this highly restrictive comes with the increased risk of nutrient deficiency, so it must be overseen by a properly qualified professional (e.g., dietitian) to ensure optimal health.

If the few foods diet is not feasible, then your next best option is to limit the intake of the foods and food ingredients from the above list. This approach is a bit less restrictive, but it still has the potential to help alleviate some ADHD symptoms.

Another dietary intervention worth exploring for ADHD treatment is the keto diet. It serves as a pseudo-elimination diet that mimics many characteristics of the few foods diets while stimulating further positive changes throughout the brain with the help of ketones.

The Ketogenic Diet and ADHD

The ketogenic diet has a long-standing place in neurology which was first used to help children with treatment-resistant epilepsy in the 1920s. Since then, keto has been proven effective as a treatment for various cases of epilepsy.

There is also a plethora of research indicating that keto dieting can help improve the function of dysfunctional metabolic pathways involved in some neurological disorders including autism spectrum disorder, Parkinson’s disease, and Alzheimer’s disease.

Interestingly enough, many of these conditions share similarities with ADHD. Does this mean that keto can help patients with ADHD as well?

Unfortunately, the research on keto and ADHD is scarce. In fact, the highest quality research I could find was conducted on dogs, not humans.

Regardless, the data can still provide us with some valuable insights into how carb restriction may impact ADHD-related behaviors. In this 6-month dietary trial, 21 dogs that had both ADHD and idiopathic epilepsy were put on either a keto diet or a standard diet.

When compared with the standard diet, the keto diet resulted in a significant improvement in ADHD-related behaviors, which are similar to behaviors expressed by humans with the condition.

The authors speculated that the alterations of energy metabolism in the brain — a phenomenon that occurs after the body starts burning more ketones for fuel — may have contributed to the behavioral changes. Hopefully, these promising results will provoke more of a demand for high-quality trials of the keto diet or ketone supplementation as a potential dietary intervention for ADHD in humans.

Why Keto May Be Helpful for ADHD

In short, keto dieting is worth exploring as a potential treatment strategy for patients with ADHD because it eliminates many of the unhealthy ingredients that may worsen ADHD-related symptoms while simultaneously stimulating ketone production.

When our brain starts burning more ketones for fuel, it causes a cascade of effects that may alleviate many ADHD-related symptoms. Let’s take a quick look at how ketones may be able to do this:

Although the keto diet can provide you with all of these benefits, it may also provoke a negative reaction if the ADHD symptoms are related to allergies and intolerances to common keto-friendly foods. For this reason, you may need to experiment with different dietary strategies and natural treatments to see what works best for you or your loved one with ADHD. To help you formulate a natural treatment plan with your doctor, let’s finish this article with the key aspects of an ADHD diet.

Putting It All Together — The Key Aspects of an ADHD Diet

Although the data on how different dietary approaches affect patients with ADHD is inconclusive, there are a few strategies that have the potential to help:

At this point, the research on ADHD indicates that these are the qualities that the ideal ADHD diet should have. By following these guidelines, many (if not all) of the symptoms of ADHD can be reversed or at least reduced in those who have a dietary component to their symptoms.

With that being said, the research on dietary interventions and supplementation for ADHD is still sparse, so it is best not to use these recommendations as a replacement for other common treatments like ADHD medications and behavioral therapy.

The best ADHD treatment plan will consist of the medications, therapies, and/or dietary strategies that apply to each individual’s specific needs.