Is Coconut Oil Actually Good for You?

Coconut oil is all the rage now. People from ketogenic dieters to paleo enthusiasts to avid cross-fitters tout it as an energy-boosting, fat-fighting “superfood”. But are any of these claims supported by sound scientific research? Or are they just based on unsubstantiated hype?

In this piece, we investigate all of the science to show how coconut oil affects your body and whether or not you should add it into your ketogenic diet.

What really is Coconut Oil?

Before investigating how coconut oil impacts your body, we need to go over a bit of nutrition and biochemistry. Coconut oil, also known as “copra oil”, is derived from the white flesh of mature coconuts. Many cultures have used coconut oil for cooking and treating conditions such as weakened immunity, dehydrated skin, and look here

Coconut oil is a fat composed entirely of molecules called triglycerides. These molecules consist of a 3- carbon molecule called glycerol attached to three chains consisting of carbon and hydrogen atoms called fatty acids. They typically come in one of three varieties. The first, called saturated fats, has no double bonds between any of the carbon atoms in the fatty acids.

Because coconut oil is primarily composed of saturated fats, many people have demonized them as unhealthy while hailing fats high in monounsaturated and polyunsaturated fats such as olive oil as healthy.

However, that assumption that all saturated fats are bad for your health has recently come under scrutiny. In 2014, researchers conducted a meta-analysis of 72 research studies including 27 randomized, controlled clinical trials examining the impact of saturated fats on cardiovascular health. Altogether the studies included over 650,000 subjects.

After assessing the data, researchers found no significant association between the consumption of saturated fats and diseases of the heart and blood vessels including coronary heart disease, angina, and heart attack.

The authors concluded “that there is no significant evidence for concluding that dietary saturated fat is associated with an increased risk of CHD or CVD.” [3] Even Harvard Medical School, which has traditionally taken a conservative stance on nutrition research, has stated that relationship between saturated fat and heart disease is “muddled” and unclear.

Because of their smaller length, MCTs have different nutritional and biochemical properties than LCTs. They have about 10% few calories: LCTs yield 9.0 calories per grams while MCTs yield 8.3 calories per gram. [5] After being digested, MCTs go straight from your small intestine to your liver where they are rapidly broken down to yield energy.

Thus, MCTs can be more readily used by your body as energy than LCTs. It is important to note that LCTs are not always saturated. Soybean oil and safflower oil are examples of unsaturated LCTs.

Because of coconut oil’s unique chemical composition of MCTs and the fact that it is the only vegetable-based saturated fat, scientists have been particularly curious to learn how it impacts human health. Below we look at research studies evaluating four unique ways that coconut oil may affect your weight, body fat, and overall health.

According to biochemistry, MCTs are more easily yield energy more readily than LCTs. However, what does this mean for your body? In a study from 1991, scientists sought to compare how many calories are burned after consuming a meal of LCTs and one of MCTs.

The dose of 30 g of MCTs and 8 g of LCTs was designed to imitate the ratio of saturated fats in coconut oil. The two meals were identical in calories and proportion of calories from fats, carbohydrates, and proteins. About six hours after each meal, the researchers measured the subjects’ postprandial thermogenesis (PPT), which is the energy used to carry out digestion.

In the obese subjects, this increase was even greater: they experienced a 67% increase in energy expenditure after consuming the MCT diet. [6] Because of this observation, the authors stated that energy consumption is “…enhanced in both lean and obese subjects when LCTs in a mixed meal are replaced with MCTs.” [6] 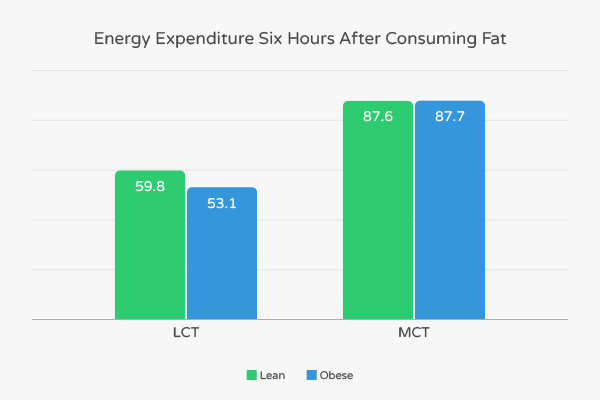 Other studies have shown similar findings. In one clinical trial on seven healthy men with an average age of 21, researchers provided subjects with 400 calories of MCT or LCT and monitored their postprandial oxygen consumption- a key indicator of energy expenditure- for six hours.

On average, the two groups that consumed 15-30 grams of MCTs burned an extra 120 calories- about 5% more than the groups that consume 0 or 5 grams of MCTs. [8] As a result, the researchers stated that their “…study suggests that relatively low-to-moderate intake of MCT (15-30 g per day) as part of habitual diet may play a role in the control of human body composition by enhancing daily [energy expenditure].” [8]

It is important to emphasize, though, that these studies had small sample sizes and provided subjects with MCTs (which are abundant in coconut oil) but not actual coconut oil.

According to the authors, “the ratio of MCT to LCT was 1:2, 1:1 and 2:1 on the low-, (LMCT) medium- (MMCT) and high-MCT (HMCT) diets, respectively.” [9] All of the subjects consumed a fixed ratio of 62% calories from fats, 28% calories from carbohydrates and 10% calories from protein. However, they were free to consume whatever amount of food they wanted to.

In fact, the other two groups experienced a moderate weight-gain. Below the data is displayed. The researchers concluded that swapping in MCTs for other saturated fats in a high-fat diet “can limit the excess energy intakes and weight gain produced by high-fat, energy-dense diets.” [9] 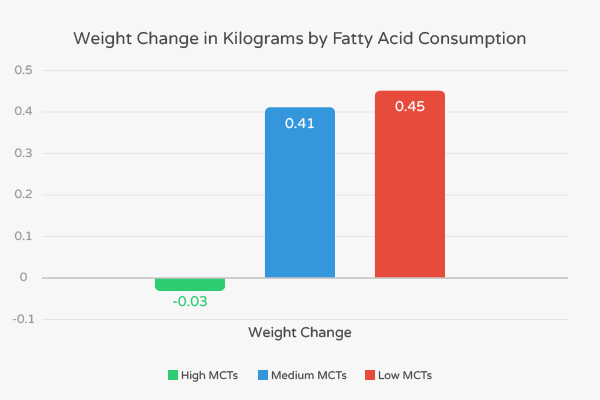 Another study on 12 healthy male subjects showed that subjects consuming a breakfast high in MCTs abstained from eating lunch for a longer period than subjects that ate a breakfast high in LCTs. [10] A scientific evaluation of the literature on coconut oil stated that while “fewer studies have examined the effects of MCT on satiety…these also suggest decreased food intake when LCT are replaced with MCT in the diet.” [11]

Thus, there is a reasonable amount of evidence to suggest that MCTs can help suppress hunger- at least when used instead of LCTs.

Key Takeaways: Swapping out fats high in LCTs, such as safflower and soybean oil, for fats high in MCTs such as coconut oil may suppress hunger and ultimately lead to greater weight-loss.

However, virgin coconut oil and other foods high in MCTs need to be assessed more rigorously against other weight-loss tools, such as eating greater dietary fiber, to better understand its effectiveness.

Cholesterol in the body most commonly comes in two different forms: LDL cholesterol (LDL-C) and HDL cholesterol (HDL-C). It is well-accepted among health professionals and researchers that increased levels of HDL-C are strongly associated with a lower risk of cardiovascular illness. [12]

Generally, researchers agree that elevated levels of LDL-C is roughly associated with an increased risk of cardiovascular disease- though LDL particle count and LDL particle size may be stronger indicators as well. [13, 14]

So, how does consuming coconut oil affect HDL-C and LDL-C? In a double-blind, randomized clinical trial with 40 women ages 20-40, researchers divided the subjects into two groups and provided them with 30 mL daily doses of supplements for 12 weeks.

Researchers collected one week prior to the 12-week dietary intervention and one week after it was finished. At the first data collection, researchers noted no differences in cholesterol levels, BMI, or waist circumference. At the second data collection, they noted that women who consumed the coconut oil supplements had increased levels of HDL-C from 45.0 mg/dL to 48.70 mg/dL. [15] This represents an 8.2% increase. [15]

In contrast, the women who ate the soybean oil supplement had no changes in HDL-C. Additionally, while BMI was reduced in both groups, only the group that consumed coconut oil experienced a reduction in waist circumference. As a result of their findings, the researchers stated that “It appears that dietetic supplementation with coconut oil does not cause dyslipidemia and seems to promote a reduction in abdominal obesity.” [15] 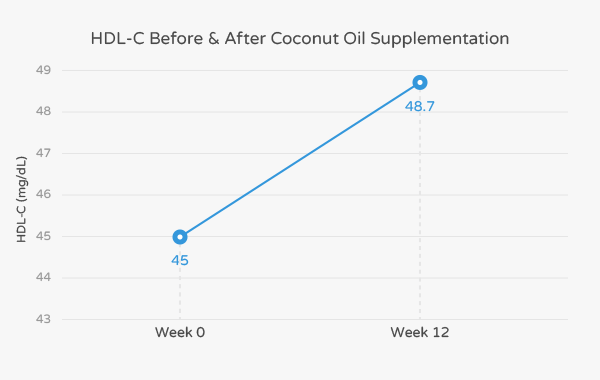 Another double blind clinical trial from China on 101 subjects showed that those who consumed oil high in MCTs experienced greater reductions in LDL cholesterol and increases in HDL cholesterol compared to subjects that consumed LCTs after 8 weeks. [16]

Key Takeaways: Several high-quality, randomized controlled trials indicate that consuming coconut oil instead of foods and oils high in LCTs may increase heart-healthy HDL cholesterol and decrease LDL cholesterol. More research needs to be done to compare the effects of coconut oil with oils high in polyunsaturated fats such as olive oil.

Doctors and dietitians agree that visceral fat, or the fat found in the stomach or waist, is particularly harmful to long-term health. [19] Interestingly, some research suggests that consuming coconut oil can help you shed belly fat. In a six-week study from 2011, researchers examined the effects of coconut oil on weight-reduction in 20 obese Malaysian men.

The subjects had an average age of 40.7 years and were all overweight (defined as having a BMI greater than 25). During the trial, they were asked to maintain their normal diet and consume 30 mL of coconut oil per day.

At the end of the six weeks, they noted that the average waist circumference decreased from 102.62 cm to 99.78 cm. This represents a 2.84 cm, approximately a little over an inch. 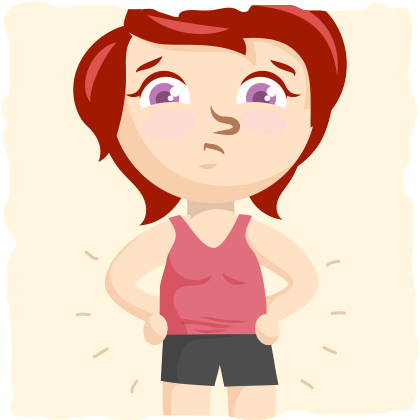 While that may not seem like much, it is important to emphasize that the only change the participants in the study made was incorporating 30 mL of coconut to their diet.

Thus, the authors concluded that “virgin coconut oil is efficacious in [waist-circumferance] reduction especially in males and is safe for us in human.” [20] The subjects also experienced another unexpected benefit: they had lower levels of creatinine which indicates lower levels of inflammation in the body.

Key Takeaways: Consuming a moderate amount (up to 30 mL) of coconut oil may reduce harmful abdominal fat. However, more rigorous trials need to be conducted to establish a stronger association.

Because coconut oil is composed primarily of saturated fats, it has been mired in controversy for decades. However, it is important to straighten out the key fats on coconut oil:

Given the reasonably strong research, how can you incorporate coconut oil into your diet? First, pick up a trusted brand of virgin, unprocessed coconut oil. You can find a set of trusted brands at this link from Evolving Wellness.

Then, consider swapping out a tablespoon of butter, lard, or oil high in long-chain triglycerides such as soybean or peanut oil. Remember to bear in mind, though, that coconut oil has not been tested against healthful fats such as olive oil- though some research may indicate it may stimulate the highest resting energy expenditure.

As you use coconut oil for a variety of recipes, remember to monitor key indices such as body fat, waist circumference, and HDL and LDL cholesterol to understand how coconut oil is affecting your body. This way you can use the research to make lifestyle changes and utilize data to see if coconut oil is the right choice for you.