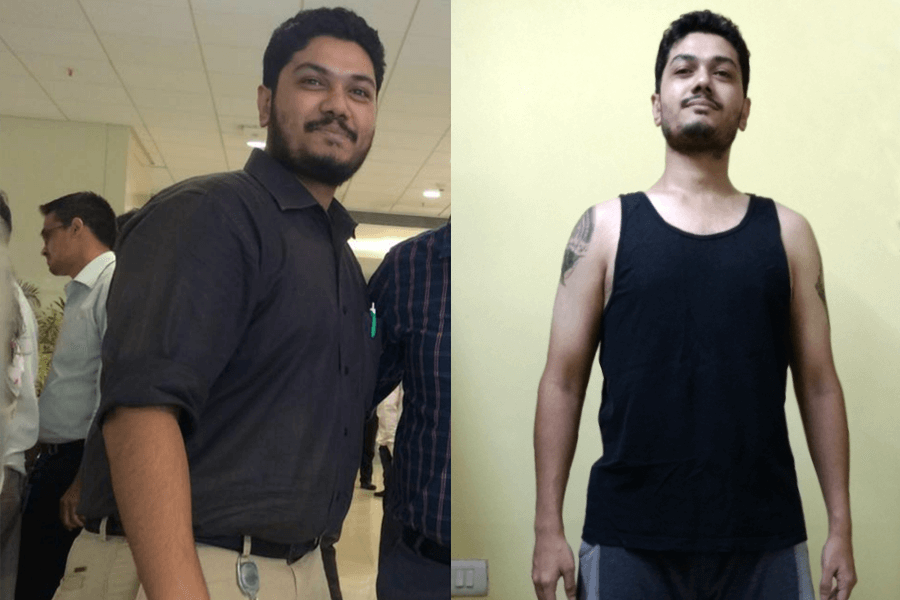 I started my Keto journey in August of 2018.

As can be seen from the first pic, my before shows a bloated, puffy me; someone who looks like he’s been stuffed into his clothes. That realization, and the fact that the bathroom scales showed me as being merely 1 kilo shy of a 100, prompted me to get serious with changing my lifestyle into a healthy one.

I spent the first couple weeks just reading up on what the Keto diet is all about, and understanding the science behind it. The biggest challenge was engineering a mind-shift that fats were good for you and that eating fats would help you lose weight if you did it properly – having been brought up on cautionary tales of how cheese, butter et al would make you fat, the battle first began in the mind.

Then I started gearing my kitchen for it. Out went the packets of crisps and the cup noodles that had become a staple due to my working habits. Out went the stored rice and wheat flour (we Indians love our rice and chapatis). Out went the potatoes, the easiest to make of all vegetables. And in came packets of butter, cheese, chicken, pork, beef, eggs, broccoli, cauliflower, and all the other Keto staples.

I never calculated macros, right from the beginning. Yes, I planned my meals and made sure I wouldn’t overeat, but I preferred to let my body judge what seemed like the right amount of nutrition required than calculate my daily intake. This approach paid off for me, as in just two weeks there was a noticeable difference – I could actually cinch my belt one notch tighter than I usually did!

3 years before I started Keto, in 2015, I had been diagnosed with gout. the doctor had advised me to cut my protein intake to the bare minimum, avoid fatty foods, and be prepared for cyclic gout attacks. Once I got on to Keto, I had blood tests done a couple of months in. Sure enough, my Uric acid levels had shot up beyond permissible levels, as had my blood cholesterol levels. But I had read about this, about how this would happen in the initial stages as my body adapted itself to its new lifestyle. My next blood tests (8 months down the line) showed both my uric acid AND cholesterol levels well within the permissible limits. And in the year and a half that I have been on Keto, not even one gout attack!

I stand at 75 Kilos now, and I stand with much more self-confidence and with the belief that I can do whatever I set my mind to. The Me in 2017 would have scoffed at the mere idea that I could lose so much weight in so little time. The Me now would have a tale or two to tell him.

Initially, I planned out an entire week’s worth of meals and stocked up accordingly. This helped me get into the habit of Keto eating, and I actually saw visible results in just two weeks. Once that happened, just looking at myself in the mirror and watch the transformation happen because I was sticking to a regime was motivation itself for the rest of the journey. Also, the part where I could actually fit into clothes which had been bought 3-4 years ago and then not worn at all because they didn’t fit at that time was another huge boost.

Cutting out sugar and bread had the biggest impact. Being Indian, it was hard to let go of the feeling that a full meal must comprise of breads/rice or its equivalent; but once that happened and the dependency on carbs went away, it was like being a totally new person. Just the difference in the levels of alertness during my waking hours was well worth it.

There may be a lot of ready-made plans available for you, but keep experimenting and trying out modifications to see what’s best for you and what does your body responds favorably to. Everyone’s physiology and metabolism are different; what works for one person may not necessarily work for another. Understand this, and do not lose hope.

I feel much more confident when facing people. I feel I am at a juncture where I can tell people, “If you think you can’t achieve success in whatever you want to do, look at me. I’m a living, breathing example of what can be achieved if you’re determined enough and are ready to go all out to obtain it.”

The biggest change in my day-to-day life has been the way people look at me. My friends and family had earlier given up on me ever being serious enough to get fit again, and now I am being looked upon by them as someone who through personal experience has proved himself a person to be followed and the advice given listened to. For a lot of people, I am changing the way they think and look at obstacles.

My biggest support was my wife. Initially, we had planned on starting Keto together, but she was forced to postpone her beginning for a couple of months. But in those couple months, she made sure I not only started but stuck to the diet, and encouraged me every step of the way. I think she definitely was happier than me when we saw the changes happen.

Also, the various links provided by my brother in law (including ruled.me) who was an early adopter of Keto helped me understand the science behind it and dispelled my thought of it being just another fad diet. In addition, I joined a WhatsApp group comprised of people following Keto in India. This group had like-minded people sharing information on Keto, discussing different aspects of it, sharing before-after pics as a motivation progress bar tool as well as trying and sharing Keto recipes.

Currently, more than a year into Keto, it’s become a lifestyle choice rather than a diet. We have our staples when it comes to certain foods, and in order to keep the experience fresh and lively, we experiment with new recipes as well. In addition, my wife and I have also begun a home bakery where we make and sell exclusively Keto desserts!

Our modified version of your BBQ Bacon Wrapped Smokies is an all-time favorite of ours, usually it’s something we end up having at least once a week. It’s easy, it’s fast, and it’s oh so tasty!

I would have started working out way earlier than when I did – at least a couple or three months into starting Keto. As it stands, I only started working out after I lost close to 25 kilos. The result being I am realizing it is a lot harder to tone loose skin now than if I had focused on it from the beginning.