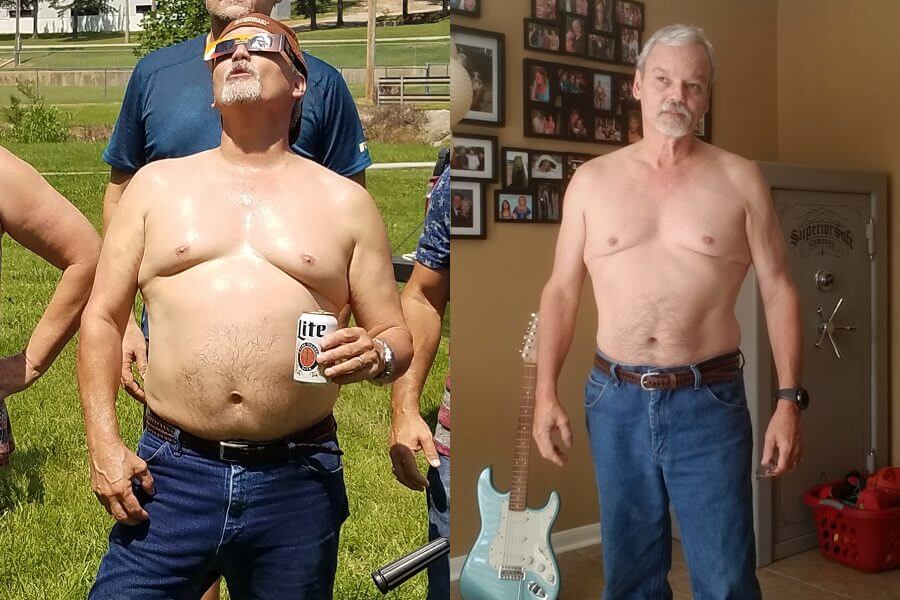 During a trip to see the solar eclipse, my wife began researching Keto. I was pretty ambivalent about it until I saw a photograph of myself beside the telescope. On August 21st, I weighed 189 lbs and had been averaging 6.3 A1c.

I began following the Keto plan which was not as difficult as I expected it to be. Staying away from carbs left me with plenty of choices and so I never felt deprived. I knew I was losing weight but the real encouragement came 6 weeks after I began. My endocrinologist walked into the room with my lab work and said as a question, “You are down 19 pounds and your A1c is a 5?” We removed Aloglyptin from my treatment.

I continued to limit my net carb intake to 20 or 30 grams a day until I reached my current weight of 159. It took a total of 3 months to drop 30 lbs. In November I began to allow more carbs to my diet but knowing what I know now I keep it moderate and my weight has remained steady at 159 even through Thanksgiving and Christmas. In early January, my A1c is 5.2 so we have removed Glimeperide as well.

I don’t see Keto as a diet, it is just an awareness of how my body works.

Ignored calories, fat, etc but counted net carbs only. If no label, I used Google “How many carbs are in an apple?”

Sandwich bread and tortillas – 15 to 18 grams each! Wow! I was saturating myself with carbs and didn’t even know it. Also, I replaced cereal and milk in the morning with eggs. Used a sugar substitute in coffee then found I like it black anyway!

Be patient. It took two weeks before I noticed a real trend, then it was slow… but it was pretty steady. I experienced periods where the weight loss stopped, but it resumed after a week or so. Play the ‘long game’ and remain steady.

I am much more agile. Back and hip pain is much reduced I assume due to carrying less weight. I have more energy. I like what I see in the mirror.

I only think of this when I eat, and even then it is not a ‘big’ change. Once you get accustomed to not eating so many carbs there are plenty of choices.

My wife and neighbors did this with me. We discussed it regularly and shared experiences. Seeing the effects on 4 adults was inspiring.

Just watch the carbs. I am not afraid to eat at fast food, I just as for my burger or burrito in a box rather than a bun

Before I found this site, my wife had begun replacing pasta with zucchini and I was surprised at how much I liked it! I am not a veggie person but this made me more open-minded about my choices.

I would have started earlier! Diabetes can do so much harm, I have managed mine with medication but it is so easy to prevent rather than needing to treat.