Emily Lost 30 Lbs and Got Her Energy Back 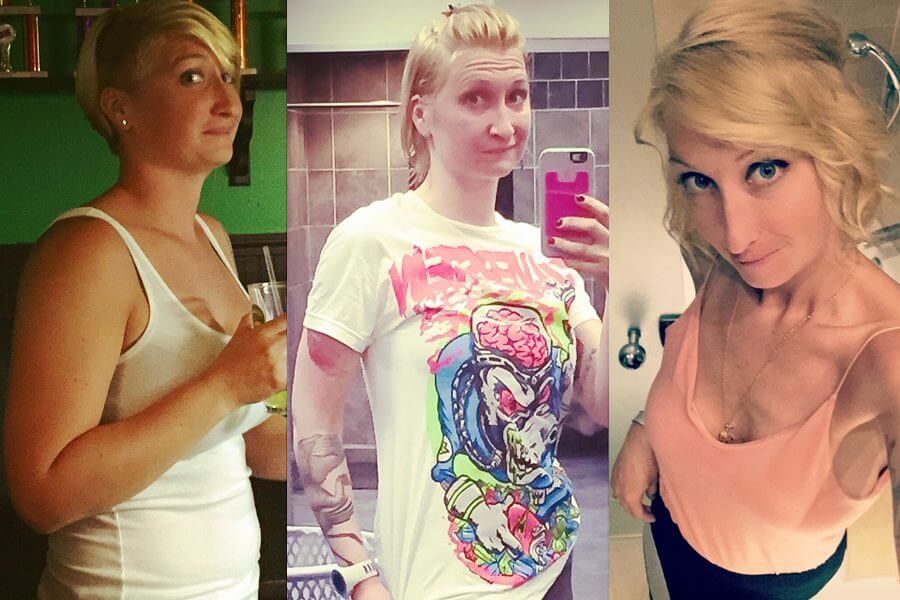 I have been active, involved and passionate about sports since I was young. In high school, I was the first female on the wrestling team and was varsity for three years. I attended wrestling camp in summer, and was given nutrition seminars and taught the food pyramid/low-fat school of thought. It was drilled into my way of thinking that fat is bad…I drank skim milk, ate lean protein like chicken and fish, and deprived myself of lots of junk food that most teenagers eat.

Making my weight class was so important, and I did it in many unhealthy ways.

In 2008 I went through the police academy and had to pass their run tests. I trained hard just to barely make my mile time. It wasn’t enjoyable for me. I struggled with running.

After 30 my metabolism did the “mainstream” thing and slowed to a crawl. For years it was a battle with the scale to enjoy life and still maintain my weight. I was struggling mentally, emotionally and physically with my weight gain. I had never weighed so much or gone up so much in clothes size. On my 5’7” frame I found myself at almost 160 lbs when I had been around 130 for most of my adult life. On top of that, I was starting to have stomach issues, and I found it hard to get through a day without needing a nap. I felt myself a far cry from the energetic, athletic person that I had always been.

In 2013 I started running off and on and in 2015 I got more serious about it. I started to enjoy running for ME and as a great way to be outside while doing a full-body workout.

My mile times were slow and my body was complaining. I had shin splints, foot pain, and I felt like I was running in place. I knew if I ever wanted to get more competitive about running I’d have to lose weight. I also knew if I kept gaining weight, I’d become more hopeless and critical of myself. That year I’d bought my first one-piece bathing suit since I was 12…that was a real tough pill to swallow.

Nothing seemed to work and I’d been in the same frame of mind for too many years. Low fat + calorie deficit = perfect weight.

One day when at work, I saw a co-worker who also runs but he had lost a lot of weight. I spoke to him briefly and complimented his weight loss and asked how he did it.

I had no idea the impact that those two little words would have. They changed my life and my way of thinking forever. My coworker briefly explained to me what the diet entailed and suggested I read the book “Bacon and Butter”.

I bought the book and was very intrigued. I wanted to know exactly how to go about starting the diet. This started a landslide hunt for information. I bought several books including “Grain Brain”. I searched web pages like Reddit where people were asking questions and I was soaking up the replies. I visited many different recipe sites, because finding what to eat, and substituting my usual foods was the biggest challenge.

I started the ketogenic diet in April of 2016. I had just finished 12 days of juicing, which didn’t even provide me with a weight loss of more than 5lbs. I was nervous to eat fatty foods and had the thought that most people trying keto for the first time must-have. “Am I just going to gain more weight?” I, unlike many, had the benefit of seeing someone in person who’d done it successfully.

I knew if I wanted to commit to the lifestyle it would have to be 100%. There could be no cheat days until long after ketosis was achieved. I had my fair share of plateaus, but with each couple pounds gone, it was reaffirming that my consistency was paying off.

By September I had lost 31lbs. I had achieved my goal and surpassed my expectations. I was running easier, faster, happier. I had energy I hadn’t had in years, and I didn’t need to take naps just to get through the day. I was suffering from almost no migraines where before I could count on at least 1-2 a month.

The ketogenic diet, or as we converts say, lifestyle, changed me.

It’s amazing to see how a diet that’s been around since early 1900 is just becoming more known and widely supported. The vilification of fat has set many people back mentally in terms of accepting the ketogenic diet.

My goal has been and will continue to be to help anyone who wants to change their life, lose weight, and become healthier. Through support, experience, and what information I gained along my way with trial and error. 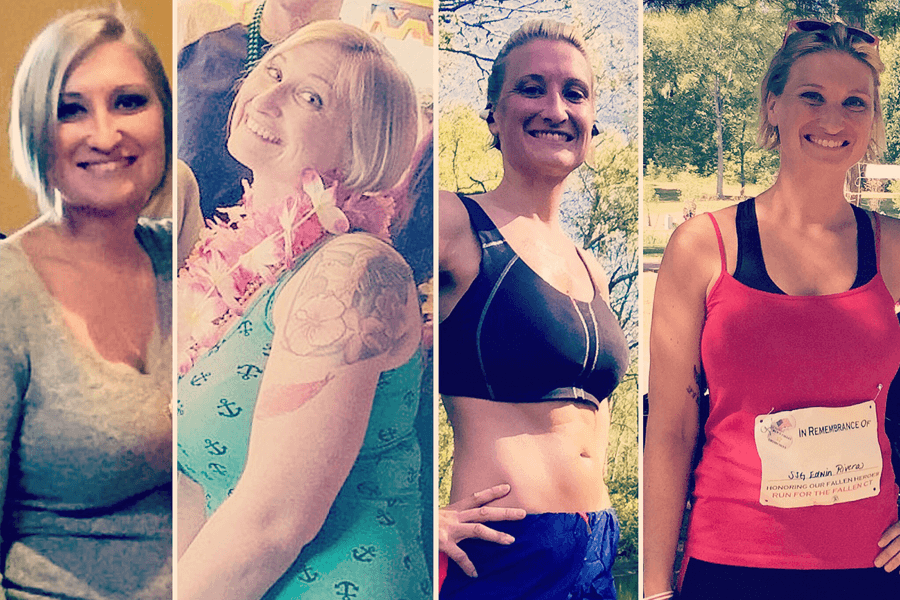 The tactics I used to help reach my goal was consistency and transparency. I logged my meals with my fitness pal to make sure that I was reaching the appropriate macros for keto. If I was at my daily intake halfway through the day I was done eating for the day. Or I would eat only things with no carbs like cheese for the remainder of the day. If I went over, I made sure to make note of that too. I rarely went over my carbs, but protein was hard to limit at first. I was trying to eat a lot of eggs and chicken and found I was over that 30% cutoff faster than the other macros.

The most impactful change to my diet has been the realization of how much hidden sugar is in everything. I have always been a bread and pasta person, but never really a “sweets” person. When I started to pay attention to how much sugar was in things like milk (holy cow) and fruits (sadly), it shocked me to see where my sugar intake was. I think changing my sugar intake was so impactful because I would have major low blood sugar attacks before when I was exercising. I couldn’t understand why I wasn’t able to work out for even 40 minutes without feeling like I was going to pass out or get the shakes.

The best single piece of advice that I could give a beginner keto-er is STICK WITH IT! There is so much plateauing in keto and especially right after losing an easy 5 lbs of water weight, you expect it will continue to go as fast. It may take a while to get to your goal weight, but I still found it easier to lose weight with keto than with any other diet. And although it seems at times like you’re not progressing, it takes the body a while to adjust to your new way of fat burning. Once it adjusts its a way better and I think a longer-lasting way of losing weight than other diets.

I think human nature is to always want to be better. To always want to keep improving, and striving for more. I am very happy since losing weight, and surpassing my goal weight loss. Now my goals have changed to include more muscle toning and definition since I’m not carrying the extra weight. I would also like to start to change the minds of more distance runners who have been carb-reliant.

The biggest change in my day to day life is how much energy the ketogenic diet has given me. Before starting keto I was taking naps often just to get through the day. Sometimes at work, I struggled to stay awake. Once I truly became fat adapted, I had more energy than I’d had since I was a kid. I didn’t need naps anymore and I felt more focused, clear, and awake throughout the day. I no longer felt like a carb-zombie.

Support through my journey wasn’t as easy to find in my daily life. Friends and family who had never heard about keto were skeptical and concerned. I found a huge online support of people some of who are in different parts of the world. The Reddit community was very easily accessible, and many people had the same questions that I had and I had the benefit of reading the community answers. It was great to have different opinions and ideas available to me. Ruled.me was the most informative on cholesterol and the specifics of what keto does to your cholesterol levels. I found that is the one area that most skeptics are concerned about.

To manage my daily diet I make sure I don’t bring bad food into the house. I find the people who fail/struggle the most with ketogenic diet are the ones with family members, who have bad eating habits. When someone wants to make a huge life change especially with diet, it’s way harder to do so when someone in your family is eating tempting sugary, carb-loaded food right in front of you. And then when they AREN’T home, you have access to that food when no one is looking which is very tempting.

My favorite recipe from ruled.me is the keto cauliflower Mac and cheese! Being more of a carb lover than a sweets lover saying goodbye to Mac and cheese was going to be torture. I really wasn’t looking forward to trying cauliflower anything, because I found other substitutes (spaghetti squash in the past) to have too much of a veggie, earth-like flavor. But I’ve found cauliflower to be an amazing very neutral substitute. The ruled.me Mac and cheese is such an easy recipe and a tasty replacement for old staple food.

The one thing I wish I had done from the start of my journey would be to log. I had NO idea that keto would give me the results it did with weight loss and health improvement. To be fair there have been many fad-diets to come and go and not many (seem to) work better than another. If I had known that I would have such great personal success with the ketogenic diet, I would have taken body measurements. I had a panel of base blood work done at the doctors and logged more of my daily meals than I did.

I hope this gives more insight into my keto story! I have tried to inspire others, especially runners on my Instagram @keto_fueled_runner . I think the latest community of people who are afraid to try keto is runners and bodybuilders. It is so hard for many to consider a diet that doesn’t include carb loading or lots of protein for muscles. I would love to be a part of this change, and see more endurance runners not needing to fuel mid-run with gels and gu’s